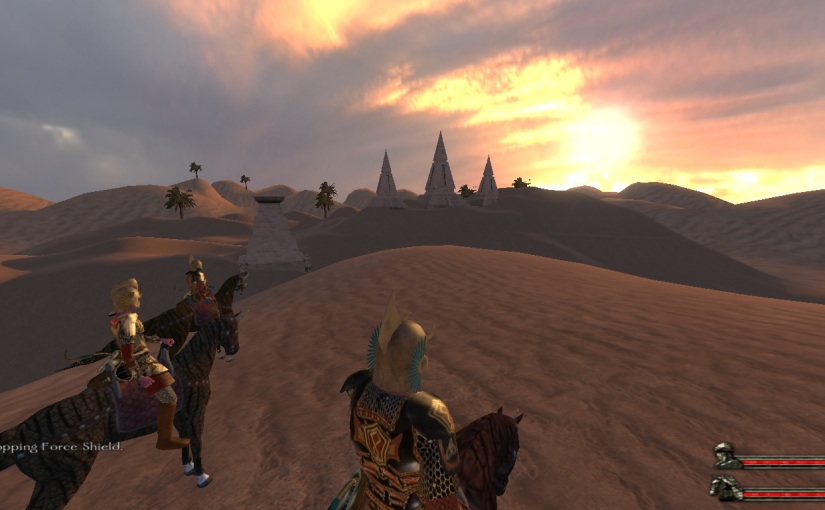 Work continues on Swords of Maruzar, and good friend Marc has promised (threatened?) to bug me every weekend to finish Warrior of the Lost Age. In the meantime, we’ve been playing Swords of Maruzar online through Google Meet, which I’ve been having a lot of fun with, and at the same time I’ve been making a Warband mod based on Maruzar.

Part of that’s to satisfy my itch to adventure on an exotic alien planet, and part because I’m planning to use the 3D models and screen caps as visual aids for my players and eventually, should I ever be able to afford the art, to give to the artists as pegs. I’ll be archiving the screen caps, and hopefully also announce the release of the Warband mod before Christmas, here.

Trying to write simple, powerful stories, hopefully well-told. One day I'll earn the second R to my initials like Tolkien and Martin ... View all posts by writerdariel

Deeper in the Game

From geekdom to freedom

The Other Side blog

Thoughts on RPG design and play

East of Constantinople, West of Shanghai

Heroes of the Age

What a Horrible Night to Have a Curse...

From the Sorcerer's Skull

The Eye of Joyful Sitting Amongst Friends

How we Play and GM the Cypher System and other RPG's

What Do I Know?

The RPG Games and Geekdom Site

The Cult Of Tea And Dice

For when you just have to drink tea and play RPGS

Tabletop RPG site and podcast with advice and new content.

Running tabletop RPGs and working out what I did wrong afterwards.

Strange RPG creations for your many needs!

For RPGs of All Types

Thoughts, rants and everything that comes to my mind

Life and Times of a Philippine Gamer